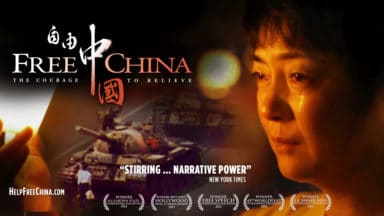 Free China: The Courage to Believe

The award winning “Free China: The Courage To Believe” (2014 Oscar Contender for Best Documentary, Best Original Score and Best Original Song) tells the true story of a mother and former Communist Party member, Jennifer Zeng, who along with more than 70 Million Chinese were practicing a belief that combined Buddhism and Daoism until the Chinese Government outlawed it. The Internet police intercepted an email and Jennifer was imprisoned for her faith. As she endured physical and mental torture, she had to decide: does she stand her ground and languish in jail, or does she recant her belief so she can tell her story to the world and be reunited with her family?